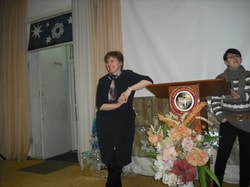 Sickness, financial ruin, an unhappy marriage, a rebellious teenager…. Sometimes we face obstacles in our lives! God has done so much for us, but sometimes we forget & get too focused on the giants!!

In 1 Samuel 17, David faced a giant by the name of Goliath! He was outclassed, outnumbered, and lacked experience in warfare. BUT HE WON! What can we learn from David so we can overcome obstacles as he did?

Stone #1: God’s presence: Matthew 28:20 says Jesus will never leave or forsake us. Look beyond the giant to your God and tell your Goliath, “MY GOD IS BIGGER THAN YOU!!”

Stone #2: God’s word: Heb. 4:12 says God’s word is alive and active. When facing a giant, go to the brook of God’s Spirit and pull out the word that’s alive to you about the situation. (For example: Facing the giant of a rebellious child? The book of Isaiah says all your children will be taught of the Lord!)

Stone #3: God’s covenant: David knew he had a covenant with God. But if you’re a believer, Heb. 8:6 says you have a better covenant and God promises in Psalms that He will never break His covenant (or contract)!

Stone #4: The name of Jesus: David told Goliath he was coming to him in “the name of the Lord God of Israel whom you are defying….” We now have the name of Jesus! John 16:23 says we have the right to approach the Father in prayer in the name of Jesus whenever we need to and that whatever we ask we’ll receive!

Stone #5: God’s faithfulness to us in the past. David looked back to the times God helped him kill a lion and a bear with a slingshot when he was alone with his father’s sheep. He knew the same God who saved him from these predators would deliver him again. Heb. 11:11 says Sara received strength to concecive seed because she considered God’s faithfulness. Come on, look into your past and think about it. Has God ever let you down before? NO!! He will take care of you now!

So, if you’re facing a giant, use your five smooth stones to defeat the enemy!